We have our new Parish App available for you to download

NOTE: There is a bug in Edge and Internet Explorer - they so not display the bulletin currently.

Please use Chrome or Firefox.

Our Lady of the Lake 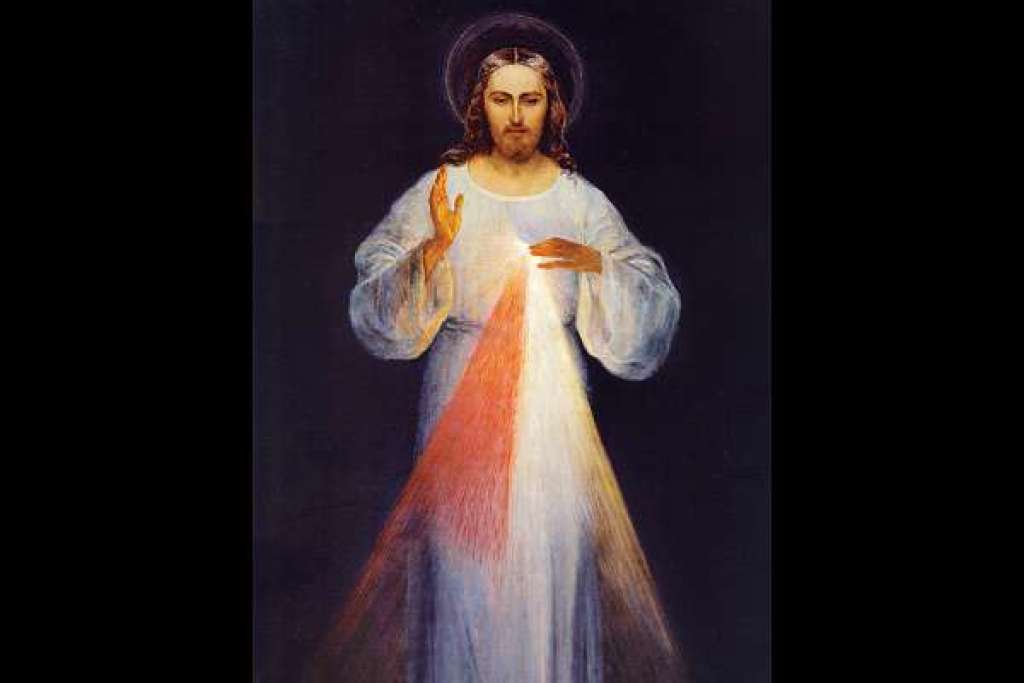 Reflections from the Diary of Saint Maria Faustina Kowalska

Beg for Mercy
Our Duty

December 16, ['36]. I have offered this day for Russia. ... After Holy Communion, Jesus said to me, I cannot suffer that country any longer. Do not tie my hands, My daughter. I understood that if it had not been for the prayers of souls that are pleasing to God, that whole nation would have already been reduced to nothingness (Diary, 818).

When once I asked the Lord Jesus how He could tolerate so many sins and crimes and not punish them, the Lord answered me, I have eternity for punishing [these], and so I am prolonging the time of mercy for the sake of [sinners]. But woe to them if they do not recognize this time of My visitation. My daughter, secretary of My mercy, your duty is not only to write about and proclaim My mercy, but also to beg for this grace for them, so that they too may glorify My mercy (Diary, 1160).

My Prayer Response:
Lord Jesus, thank You for instructing St. Faustina not only to write about Your mercy toward sinners but also to beg for mercy for them.

"Behold, you will conceive in your womb and bear a son, and you shall name him Jesus." Today is the last Sunday of the Advent season, and we hear in the Gospel the anticipation of the feast we will celebrate in just one day. Christmas is coming!  Jesus is on his way!

We have had weeks to prepare for this momentous occasion, and now we are on the very verge of its arrival. The children in our midst can hardly contain their excitement as they wait to wake up on Christmas morning. The thrill of this coming moment is meant to remind us of the joy and anticipation we should all feel as we await the coming of Christ. Yes, Christmas is a great feast, but there is more here than a remembrance of the past or a fabulous party in the present. There is a looking-ahead as well. We celebrate as we anticipate.

Much as Mary must have waited in wonder during the nine months of her pregnancy, we wait in hopeful xpectation as Christians looking forward to being reunited with our Savior. Our future is full of hope. The deflating melancholy that afflicts many people after a holiday runs its course need not be the experience of the Christian waiting for Christ. We are always looking forward to something! There is never a moment when we have no cause for joy. Our lives are lived in a kind of unending advent as we stand in watchful waiting.

Let us remember this as we enter into our Christmas Eve gatherings and festivities. As we join with family and friends to share in the good things of this life, may we carry with us the joy of knowing that even better things lie in store for us who welcome the infant Jesus into our hearts and homes.

"For they preach but they do not practice." The scribes and Pharisees may be the ones Jesus was speaking about in today's Gospel, but we must be careful not to dismiss his words when it comes to our own actions. Jesus offered a difficult challenge to those honor-seekers that we must also heed when he said, "The greatest among you must be your servant." This is not the way the world usually works. Generally speaking, the idea of being a servant is considered inferior to being someone who has risen to high levels of leadership or status. But Jesus wants people in positions of authority to selflessly serve those over whom they have influence. And he insists that the leaders who establish laws, rules, and guidelines do not excuse themselves from following their own directives! "Practice what you preach," as the saying goes.

Whether or not we have extensive public influence, almost all of us at certain points are in a position to exercise leadership--with our children and families, with classmates, coworkers, neighbors, friends, and sometimes trangers. When these moments arise, we are called to step into this role without being hypocrites.  It's important to be sure we don't issue unrealistic demands on others that we ourselves would find it burdensome or even impossible to fulfill. This requires the virtue of humility. Instead of reveling in the authority we may have at any given moment, instead of creating "heavy burdens hard to carry and lay[ing] them on people's shoulders," we need to be ready and willing to walk a mile in their shoes, and lead accordingly. And Jesus tells us clearly that this servant leadership will be rewarded, for "whoever humbles himself will be exalted."

"And so I say to you, you are Peter, and upon this rock I will build my church." Simon got a new name after his profession of faith. As soon as he declared to Jesus, "You are the Christ, the Son of the living God," Jesus renamed him with a title that means "rock." And with that name he gave Peter the mission to be a solid foundation upon which he would build his church. Not Peter's church. Not James or Paul's church. Not Martin Luther's or John Calvin's or anybody else's. This is Jesus' church, the church of Christ himself, that we call the Catholic Church.

So it was Christ himself who desired to give authority in the church--"the keys to the kingdom of heaven"--to a human leader. Peter was thus established as the first pope. He exercised a special kind of headship, within the community of the apostles and the church at large, because Jesus gave him the power to do so, not because Peter claimed it for himself. And so too every pope since, right down to our Holy Father today, exercises this unique leadership within the Church.

What a gift this is to us! Jesus knew well the human tendency to squabble and disagree, to argue and compete. He knew that the church would be prone to all of this because of her members, and that providing a final voice of authority, saying in effect that "the buck stops here" would be helpful for maintaining unity. As Catholics, even in spite of the differing opinions and perspectives that are manifest in the Church, we nonetheless maintain a strong sense of identity and belief thanks in large part to the papacy. Today, may we give thanks for the pope and pray for him as he strives to lead all of us closer and closer to Christ.

The Transfiguration of the Lord "This is my beloved Son, with whom I am well pleased; listen to him." Oh, to be on that mountain! What a priceless experience for Peter, James, and John. If they had ever doubted, if they wondered whether Jesus was really who he said he was, their confidence surely got a boost on the day of the Transfiguration.  Before their very eyes, Jesus' divine beauty radiated gloriously while the two ancient prophets also appeared in a miraculous manner. And to top it off, the voice of God the Father spoke from the heavens and confirmed that it was all true: Jesus really is the Son of God!

Why did Jesus reveal himself in such a remarkable way to these men? Perhaps we have an answer in today's epistle. Peter writes, "We ourselves heard this voice come from heaven while we were with him on the holy mountain." Peter mentions this fact in order to confirm his credibility as a preacher as he goes on to say, "We possess the prophetic message that is altogether reliable. You will do well to be attentive to it." Because of the mission that Peter had to help shape and nurture the Church in its earliest days, his position as an "eyewitness" to the Transfiguration helped to gain the attention, and the faith, of his hearers.

So although we were not there during this holy apparition, we have the benefit of it. We, and the faithful through the ages, have heard the testimony that Jesus is truly our God from those who saw in person that it was for real. In this way, the Transfiguration is able to bolster the faith of many, not just the three men who were there that day. May we have the grace to allow the feast we celebrate today to truly deepen our faith.

Important Message to all Parishioners

If you know that one of your friends or loved ones is nearing death, or was recently diagnosed with a terminal illness, please notify the parish office immediately so that we can make an appointment to administer the Sacrament of Anointing of the Sick. Oftentimes I am not notified until the final hours of life and not always able to get to them. In addition to my responsibilities in the parish, I too have aging and ill parents in Lafayette and am having to tend to their needs as well. Thank you for your consideration

Please join us on the 1st Sunday of every month after 7 AM mass for coffee and doughnuts in Vandebilt Hall. Catch up with an old friend or make a new one. “Forsake not an old friend; for the new is not comparable to him: a new friend is as new wine; when it is old, thou shalt drink it with pleasure.” Sirach 9:10

Our lady has promised to assist at the hour of death, with the graces necessary for salvation, all those who, on the first Saturday of five consecutive months, shall:

3. Recite five decades of the Rosary,

4. “And keep me company for fifteen minutes while meditating

on the fifteen mysteries of the Rosary, with the intention

of making reparation to me.”

The truth of God’s Word exists before Mary’s own choosing. She submits to a word, a truth she did not create.

At the heart of the “pro-choice” mentality is the idea that we create our own truth. This mentality holds that the value of the unborn child, and that child’s right to exist, depend upon the choice of the mother.

Heavenly Father, give us the grace to build your Kingdom in our Diocese.  We can only accomplish this noble task by allowing You to expand our hearts.  Grant us compassionate hearts for the poor and suffering among us, hopeful hearts for the men now in seminary, grateful hearts to provide care for the well-being of our retired priests, and zealous hearts for the formation of our Catholic college students.  As we look to their future and the celebration of the Centennial of our Diocese, we want to give You our faithful hearts.  It is only with faithful hearts the our Diocesan campaign will bear fruit and assist You in the building up of Your Kingdom.  With Mary our Mother, and moved by the Holy Spirit, we make this prayer through Your Son, Our Lord Jesus Christ.  We entrust our humble efforts to You, with a plea for success, as we reach out to those who need us.  -Amen

Everyone is invited to tune in to the Catholic Radio Station, KLFT, 90.5 FM to learn more about your Catholic Faith.  For good Catholic music, you can also tune in to 90.9 K-LOVE.

The Diocese's Office of Marriage and Family Life will offer 2 retreats (A Catholic Journey through Grief) a year.  Pre-registration is required.  Visit www.diolaf.org/grief to register.